IS THE BRITTLE REALLY SOFT?
Despite the name, we're often asked "is your brittle actually soft?". YES. It's light and flaky, and melts in your mouth. It is 100% guaranteed not to break your teeth!! And as you eat a bag of it, the crumbs will make the most amazing topping over ice cream, yogurt, pancakes, and more!
WHO INVENTED SOFT PEANUT BRITTLE?
We've noticed some confectioners make indirect claims to have been the ones to first make soft peanut brittle (or "soft peanut butter brittle"). Certainly, we're newer to the industry and we make no claim to coming up with it (even though we believe with our process that ours is superior in both taste and texture). We've had customers tell us stories about their "grandmother in Thailand" making soft peanut brittle, and several people have told us about their grandparents in Southern Georgia and the Florida Panhandle making soft brittle. So the answer is that no one really knows where it originated. We just believe ours is the best. And we think you'll agree!
But to the question of who invented chocolate hazelnut soft brittle, bacon peanut soft brittle, all our liqueur-based English Toffee creations, and the recipes for our specialty chocolates? WE DID. Many long hours and painstaking trial-and-error with ingredients and cooking chemical reactions and processes...but these fantastic delicacies are Robinson Soft Brittle original recipes!
WHAT SPECIFIC ALLERGENS ARE IN YOUR CANDY?
Everything we produce is in a facility that makes peanut candy. However, we are fastidious about cleaning utensils and surfaces, and nothing else is produced on peanut brittle cooking days. We also have staff with life-threatening tree nut allergies, so we are also very careful about walnuts, hazelnut oil, and other allergens.
Here's a list of our candy and potential "major" allergens:
Soft Peanut Brittle: Peanuts
Chocolate Hazelnut Soft Brittle: Dairy, hazelnut oil, soy (soy lecithin and Hazelnuts in the Nutella®)
Bacon Peanut Soft Brittle: Peanuts
Apple Brandy Toffee: Dairy, soy lecithin, tree nuts
Cinnamon Whisky Toffee: Dairy, soy lecithin
Nutty Irishman Toffee: Dairy, soy lecithin, tree nuts
White Russian Toffee: Dairy, soy lecithin
Tennessee Whiskey Toffee: Dairy, soy lecithin
S'Mores Bark: Gluten, dairy, soy lecithin
Salted Caramel Bark: Dairy & soy lecithin
Peppermint Bark: Dairy & soy lecithin
Hazelnut Espresso Bark: Dairy, hazelnut oil, soy lecithin
Caramel Macchiato Bark: Dairy & soy lecithin
Mexican Hot Chocolate Bark: Dairy & soy lecithin
Java 72 Dark: No major allergens
Sea Salt Almond 72 Dark: Almonds 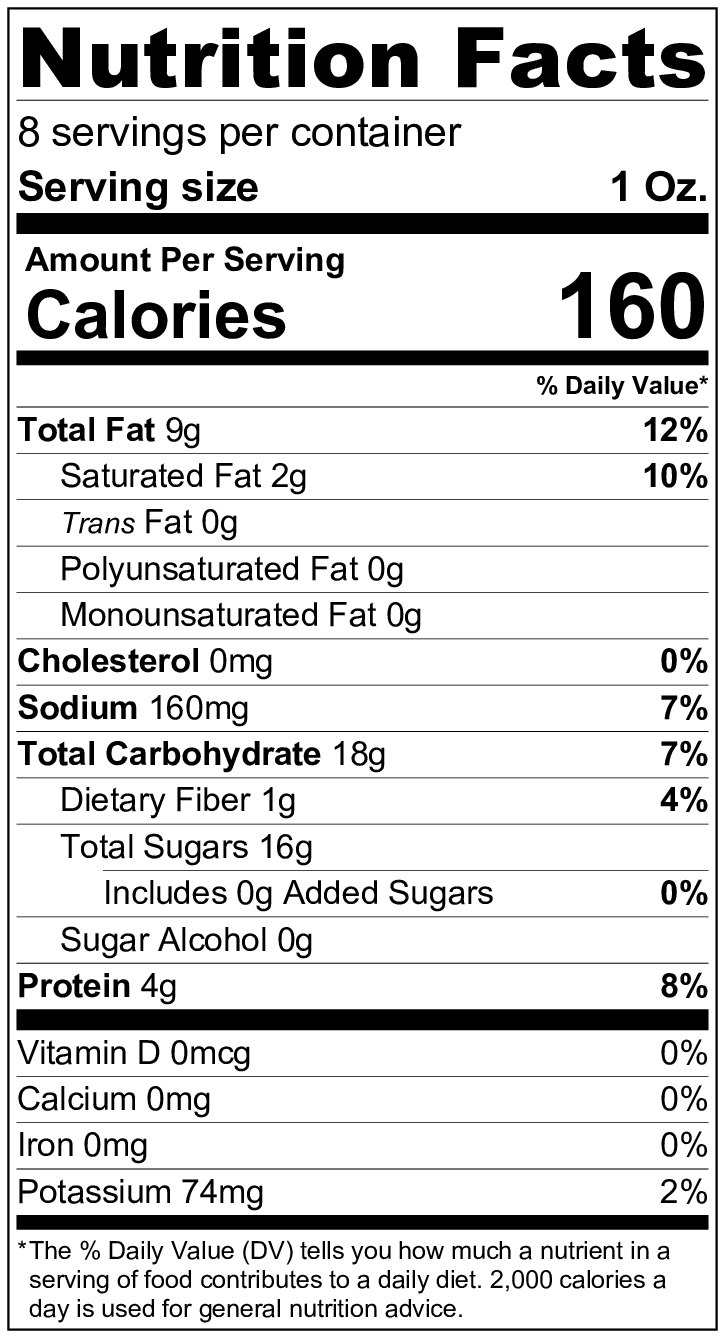 I HAVE SEEN YOUR SOFT PEANUT BRITTLE ADVERTISED AS HAVING NO GLUTEN OR DAIRY. CAN I SEE NUTRITIONAL VALUES ON THIS ITEM?
Due to the nature of ingredients, our soft peanut brittle does not contain gluten, dairy, egg, tree nuts, caffeine, high-fructose corn syrup, or soy protein. It is not organic or non-gmo as making it that way would be prohibitively expense. Because we put graham crackers in our Triple Chocolate S'Mores bark, we are also not a gluten-free facility although we are fastidious about clean surfaces, etc. We want to be 100% up front that we make no "healthy" claims about it...we're still making candy with refined sugar, light corn syrup, peanuts, and peanut butter (however, we DO use a peanut butter made with fully hydrogenated vegetable oil versus the more harmful partially-hydrogenated oil).
HOW DO I STORE SOFT PEANUT BRITTLE, BARK, OR TOFFEE?
Soft peanut brittle is extremely shelf-stable (think peanuts and peanut butter in your pantry).
It is also heat-stable (a bag of it sitting in our black SUV during a 95 degree summer day didn't melt...but it DID make our car smell absolutely delicious!).  In all seriousness...sitting in a hot car WILL make it get a bit softer, and as it gets softer it will become more "candy bar" chewy than "light and flaky"...but the taste quality will not change one bit.
In fact, soft peanut soft brittle is considered non-perishable and can be shipped internationally (we provide an affidavit to this effect for customs on international shipments). We have shipped so far to Canada and the EU, and with the customs declaration we provide it just sails through customs without delay!
Store our soft brittle or bacon peanut soft brittle in a closed bag (sealed as tightly as possible) in a dry place. For extended storage use a sealed/zip-loc bag for best freshness. Avoid high-humidity storage conditions (no refrigeration or sitting out in front of a room AC) as flaky sugar candy will become more dense (and becomes chewy) as it absorbs moisture from the air.
Chocolate-Hazelnut soft brittle, because it has chocolate and dairy, should be stored in airtight container in cool, dry place. Again, avoid humidity.
Keep all chocolates in a cool, dry place at under 70 degrees if possible (optimal is 60-65 degrees). You can refrigerate, but it's important to be extra certain it's tightly wrapped in an air-tight container as chocolate absorbs odor and moisture from the air. We'd recommend covering in cling-wrap and then inside a HIGH QUALITY zip-lock type bag, pushing as much air out of the bag as possible.
Not following these storage conditions can cause chocolate to "bloom," (develop a light-colored powdery surface on the chocolate), caused by "beta crystals " in the cocoa butter rising to the surface. When this happens, the chocolate is still safe to eat, but the texture may suffer. To prevent bloom, make sure the chocolate doesn't get too warm or experience extreme fluctuations in temperature or humidity.
SHELF LIFE
Soft Peanut Brittle: If stored as advised above, 6-8 months
Chocolate Hazelnut Soft Brittle: As above, 4-6 months
Bacon Peanut Soft Brittle: Around 2 months
Chocolate Bark: As above, up to a year.
Toffee: As above, around 3-4 months
ENGLISH TOFFEE vs. AMERICAN TOFFEE (aka "buttercrunch")

English Toffee dates back to the early 1800's. It consists of brown sugar and butter (occasionally with added rum) in a caramelized form.

"American Toffee" is made with granulated white sugar (Almond Roca, Heath Candy Bar, and the majority of toffee you will find in the USA). This toffee, rolled in chocolate and nuts is actually called "butter crunch"...an American invention by  English immigrant William Loft made in New York City in 1860. In fact, if you look at Almond Roca's packaging, they even refer to their candy as "The original buttercrunch toffee", not "English Toffee.

Interesting tidbit: Loft's company became the world's largest maker and seller of candy by the 1920's, even owning the Pepsi-Cola Corporation at one point before several decades of decline resulted in their final demise in the 1990's.

Traditional English Toffee (as we use in the base layer of our toffee creations) does not usually have nuts mixed in, as part of the delight of a true brown sugar and butter toffee is the smoothness of the texture. It should neither be hard to bite into, nor should it ever be grainy. It may be softer and chewier side (as you'll find with several fine British imported brands) or have a lightly crunchy texture (like ours) that melts in your mouth. It will often be topped with chocolate or nuts.
The importance of honoring tradition
Our family lineage dates back to John Robinson, the Cambridge-educated pastor of a country church in Scrooby, England (held in Scrooby Manor, the home of William Brewster). Robinson and Brewster led the pilgrims out of England in 1608 to Leiden, Holland, and in 1620 put 35 members of their congregation on the Mayflower to sail to America. In fact, the Robinson-Scrooby Compact of 1606 was the model for the Mayflower Compact of 1620, which became the foundation of democratic principles in the United States, the Declaration of Independence, and the US Constitution.
Going back even further, our lineage includes a knight who rode in battle with William the Conqueror at the Battle of Hastings in 1066. And the crest and coat-of-arms used in our logo is that of our actual historical family.
With a nod to our heritage, we wanted to remain true to the traditional form of this delightful delicacy. We believe you'll agree that our English Toffee is simply amazing...like nothing you've ever had before.