IS IT REALLY SOFT?
Despite the name, we're often asked "is your brittle actually soft?". YES. It's light and flaky, and melts in your mouth. It is 100% guaranteed not to break your teeth!! And as you eat a bag of it, the crumbs will make the most amazing topping over ice cream, yogurt, pancakes, and more! It's so yummy that we even crush the brittle candy and sell it as dessert topping shakers in both peanut and chocolate hazelnut varieties.
WHO INVENTED SOFT PEANUT BRITTLE?
We've noticed a few competitors (who have been around the industry for many years) claim to have been the ones to first make soft peanut brittle. Certainly, we're newer to the industry so we don't claim to have come up with it (even though we believe with our process that ours is superior in both taste and texture). We've had customers tell us stories about their "grandmother in Thailand" making soft peanut brittle, and several people have told us about their grandparents in the deep south making soft brittle. So the answer is that no one really knows where it originated. We just believe ours is the best. And we think you'll agree!
But to the question of who invented chocolate hazelnut soft brittle, apple brandy toffee, and triple chocolate hazelnut espresso bark? WE DID. Many long hours and painstaking trial-and-error with ingredients and cooking chemical reactions and processes...but these fantastic delicacies are Robinson Soft Brittle original recipes!
WHAT PORTIONS SHOULD I PLAN?
We are often asked about how much to buy to take to a party or family gathering. We can generally base it off some feedback we've received, and our own observations. So here goes:
HOW DO I STORE SOFT PEANUT BRITTLE, BARK, OR TOFFEE?
Soft peanut brittle is extremely shelf-stable (think peanuts and peanut butter).
It is also heat-stable (a bag of it sitting in our black SUV during a 95 degree summer day didn't melt...but it DID make our car smell absolutely delicious!).  In all seriousness...sitting in a hot car WILL make it get a bit softer, and as it gets softer it will become more "candy bar" chewy than "light and flaky"...but the taste quality will not change one bit.
In fact, soft peanut soft brittle is considered non-perishable (shelf life > 6 months) and can be shipped internationally (we provide an affidavit to this effect for customs on international shipments). We have shipped so far to Canada and the EU, and with the customs declaration we provide it just sails through customs without delay!
Store our soft brittle in a closed bag (sealed as tightly as possible) in a dry place. For extended storage use a sealed/zip-loc bag for best freshness. Avoid high-humidity storage conditions (no refrigeration or sitting out in front of a room AC) as flaky sugar candy will become more dense (and becomes chewy) as it absorbs moisture from the air.
Chocolate-Hazelnut soft brittle, because it has chocolate and dairy, should be consumed within approx. 3 months of purchase. And left in a hot car it CAN become softer and more gooey.
Chocolate bark or toffee...well, if left in a hot car is going to turn into a puddle of delicious goo in short order. However, chocolate bark had a reasonable shelf life, and should be consumed within approx. 3 months of purchase.
WHAT IS THE NUTRITIONAL INFO?
1) SOFT PEANUT BRITTLE 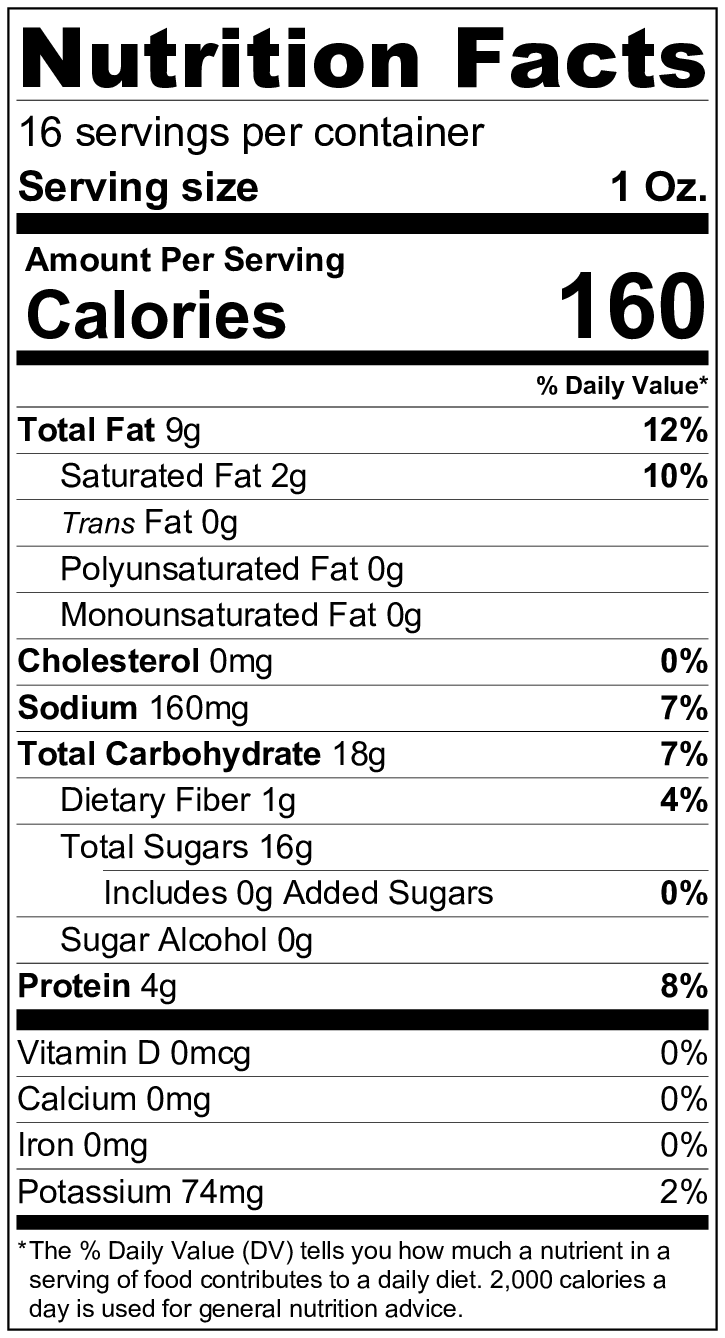 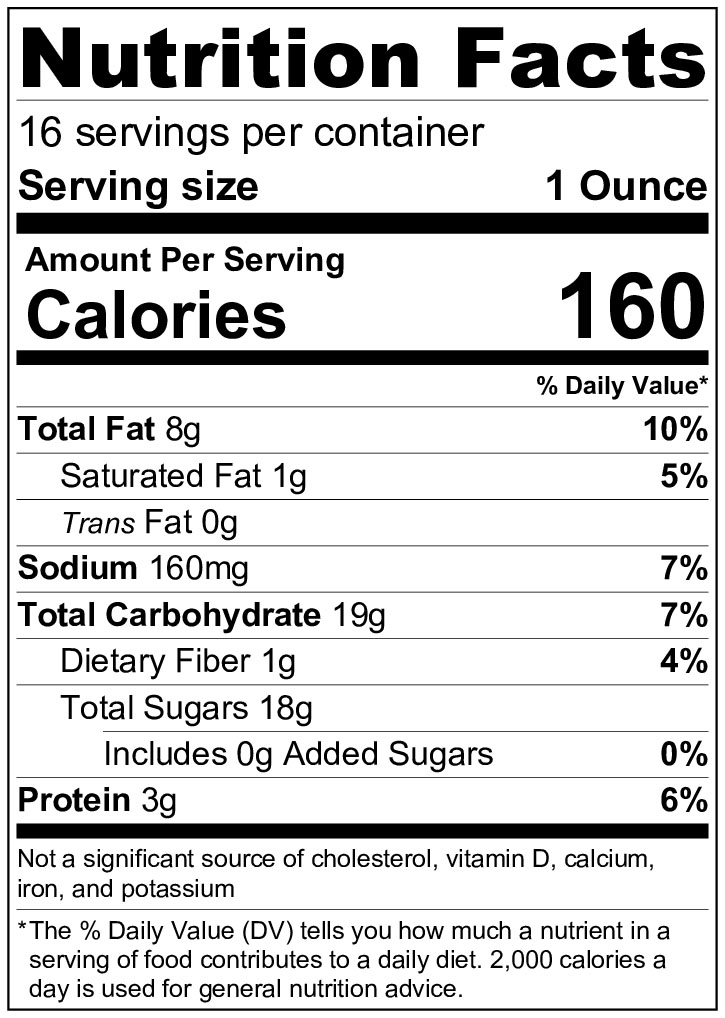 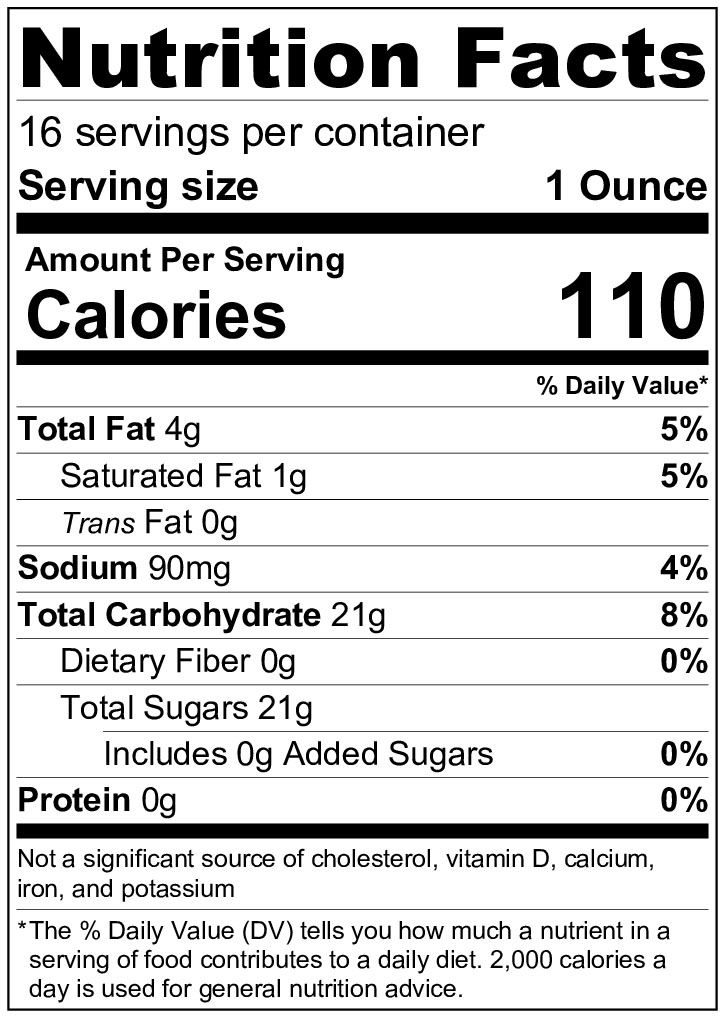